Dyson is a major player in the air-purifier industry. They have some top-notch units with unique features that set them apart from the competition. While they have got plenty of interesting air purifiers, our focus today will be on the Dyson HP04 vs. HP07.

On the surface, these two air purifiers are almost identical. However, the real question is how they compare to each other from the inside features. That’s what you’re about to find out! 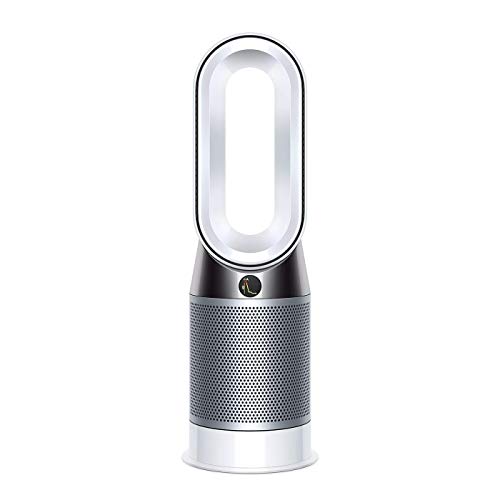 The Dyson HP04 is a 3-in-1 air purifier. To put it another way, it heats, cools, and purifies the air. It’s also better than its predecessors in a number of ways, making it stand out to this day.

Unlike other companies’ air purifiers, which seem like large, plain white boxes, the Dyson HP04 has a more upscale style. In fact, you can blend it into most modern houses without worrying about ruining your space’s decor.

This is due to its elegant design, which comprises a silver base with a circular airflow amplifier perched on top. In addition, its compact design makes it perfect for use in small spaces, such as tables or desks.

However, do not be deceived by its modest size, as it’s powerful enough to purify large rooms.

>> See the Latest Pricing on Amazon <<

In other words, it performs the same function as the HP04. That is to say, the HP07 also heats, cools, and purifies the air.

However, it has a few minor enhancements compared to its HP04 sibling, making it an exciting option.

>> See the Latest Pricing on Amazon <<

Areas of Similarities between the Dyson HP04 and HP07

The design of both air purifiers is the same. That means they both have the same base, which includes filters, air input, and a digital display.

The LCD offers plenty of helpful features and real-time data that keep you in touch with the air quality around you. I will get deeper into this functionality soon.

On top of the base, there’s an amplifier. The latter is an open vessel that allows the clean air to be redistributed back into your space. That’s right. The amplifier isn’t sitting there for show.

Okay, now it’s time to discuss their LCD screens, one of my favorite features of these Dyson HP air purifiers. Thanks to the three intelligent sensors, the latter keeps you on track with particles and gases that share the same space as you.

It also alerts you when the filter needs to be replaced, which is something you should absolutely keep an eye on. Another feature I enjoy about this LCD is that it notifies you whenever the air quality changes.

For example, if the air purifier detects particles or gases, it will inform you about the level of pollution and the culprit behind it.

Furthermore, real-time tracking isn’t limited to the display screen. There’s another way to be informed about the air quality without even being near the air purifier. You guessed right. It’s via the Dyson Link App.

Both the Dyson HP04 and HP07 can be controlled by a remote control, the Dyson Link app, and smart home assistants (Amazon Alexa, Google Assistant, and Apple Siri).

All three options allow the user to turn the device on and off, switch between cooling and heating, adjust the oscillation and fan speed, etc. And since both devices support the Dyson Link App, you can monitor and control the air purifier using the same mobile application.

If you’re like me, the remote control always seems to disappear exactly when you need it. Fortunately, Dyson designed their device’s remote control with us in mind. The latter is magnetized! Therefore, you won’t have to search for it for hours since you can easily attach it to the top of the air purifier.

The measurements of the Dyson HP04 and HP07 are almost the same. The dimensions of both air purifiers are as follows:

Once again, the Dyson HP04 and HP07 perform equally in the coverage area. They each cover about 800 square feet and feature an adjustable oscillation angle of up to 350 degrees.

The night mode allows the air purifier to operate at low decibel levels while also dimming the unit’s lights.

Areas of Difference between the Dyson HP04 and HP07

There is not much of a difference between the Dyson HP04 and HP07.

The filtration system is the only “significant” improvement the Dyson HP07 has over the HP04. While they are both equipped with a HEPA and carbon filter, the Dyson HP07 combines both into one unit, whereas the Dyson HP04 has two separate filters.

If you’re unfamiliar with air purifiers, the terms HEPA and Carbon filters might be new to you. HEPA stands for “high-efficiency particulate air.” It is designed to remove at least 99.97% of airborne particles, such as dust, pollen, mold, and bacteria. as small as 0.3 microns

A carbon filter, on the other hand, is designed to eliminate odors and smoke through a process known as adsorption.

In addition, the whole HP07 device is now HEPA13 certified, while the Dyson HP04 only has the filter certified. HEPA13 filters are considered medical grade and are better than true HEPA filters (H10 to H12 filters).

How does this translate to real-life performance? With the Dyson HP07, what goes inside stays inside. However, leaks are more likely to happen with the Dyson HP04 if you don’t change the filter when it’s saturated.

Which One Should You Choose?

Now, let’s address the most critical question you have been waiting for: which air purifier is best for you? So, unless the Dyson HP07 is on sale, the Dyson HP04 is the better choice. Also, if you already own a Dyson HP04, I wouldn’t recommend upgrading to the HP07.

That’s because the extra features of the Dyson HP07 are not worth the added expense. You can easily purchase the HP07 filter separately, put it on your Dyson HP04, and save hundreds of dollars.

So, when should you think about buying the Dyson HP07? I would consider purchasing a Dyson HP07 only if it is priced similarly to the HP04 and you do not already own an HP04. Aside from that, it’s not worth it. 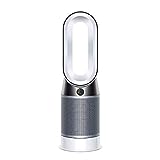 Get Our FREE Guide to Removing Pet Odors 3x Faster

Some of the features:

✓ The Right Cleaning Techniques for Pet Odors.
✓ Best Home Remedies for Cleaning Pet Urine Stains & Odors.
✓ How to Remove Pet Odors from Clothing and other Washable Fabric.
✓ And much more!

We hope you love the products we recommend! Just so you know, CleanyHome.com is a participant in the Amazon Services LLC Associates Program, an affiliate advertising program designed to provide a means for sites to earn advertising fees by linking to Amazon.com.

Affiliate Disclosure
We are a participant in the Amazon Services LLC Associates Program, an affiliate advertising program designed to provide a means for sites to earn advertising fees by linking to Amazon.com.

Get Our FREE Guide to Removing Pet Odors 3x Faster

Some of the features:

✓ The Right Cleaning Techniques for Pet Odors.
✓ Best Home Remedies for Cleaning Pet Urine Stains & Odors.
✓ How to Remove Pet Odors from Clothing and other Washable Fabric.
✓ And much more!